What Goes Up Must Come Down

My name is AJ Earley. I’m thirty years old, and I am still figuring myself out. It’s easier now than it used to be, but some of my best learning experiences have been my meditative hiking endeavors.

When I was 21, following a long struggle with bulimia, heartbreak, and the death of my newborn son, I entered a haze of “treatment” for a misdiagnosed mental illness that turned me inside out. I just wasn’t myself. I spent an entire summer attempting to end my life and it resulted in nerve damage and paralyzation all over the right side of my body. I started out in a wheelchair, then used a walker to get around, but only for as long as my stubbornness would allow.

I never imagined having to live without the full use of my limbs, and at 21, the loss was devastating. I couldn’t keep my job, I could no longer march in the bagpipe band I’d been a part of since I was a teenager, and I could no longer enjoy my most personal and sacred escape of exploring the wilderness. It had a massive impact on my life that I wouldn’t fully understand until much later. My depression and hopelessness sank even lower, and for quite some time, I thought I would never have my life—or myself—back.

For years, navigating any sort of rocky, uneven, or treacherous terrain was a dangerous mistake. After my injury, the first time that I took on more than just a level nature path along the Boise River, my family and I were at my grandparent’s cabin for the Fourth of July.  It was the first year I went up as an adult, and my heart choked up a bit when my siblings and cousin decided to climb up to Elephant Rock, an oddly shaped formation perched halfway up the mountain across from my grandparent’s land.

I walked to the base of the mountain and peered up into its intimidation. I planned to see them off and then head back to my cozy seat on the front porch. But my family, either in a state of complete forgetfulness drawn out of nostalgia, or out of a deep sense of caring and understanding for my injury and my lack of self-confidence, just acted like nothing was wrong with me at all. To them, nothing had changed since our childhood days. They gave me strength, and I started climbing.

Surprisingly, the upper leg strength I’d gained from dragging around my bum leg made the trek up fairly easy. When we reached the elephant’s trunk, I was absolutely on top of the world. We dodged in and out of the formation, teasing each other just as we’d done when we were little. We sat on the perch and gazed down at the world for a long while, until we were finally hungry enough to head back.

As soon as I stood up, I knew getting down would be a problem. I would later come to learn that having no lower leg strength meant that bending my knee to pull myself up was fine, as it drew strength from my upper leg, but bending my knee to step down left me reliant on the mostly paralyzed muscles of my lower leg. I didn’t quite understand this at the time, but I did understand that there was absolutely no way I’d be able to “walk” down. Every time I bent my right knee to take a step, I lost all of my support, so I did what I had to: I scooted down on my butt.

It was a long, rough scoot. I was certain that the back of my pants would be completely rubbed off when I got to the bottom and that I’d have to walk back to the cabin with my butt exposed. They weren’t, and I didn’t.

This day was pivotal for me. Not only because I realized that I could climb up a mountain, but because I discovered that my problem was the opposite of most: going uphill was much easier than going down. I’m not sure why that delighted me so much, but from that day forward, there was no stopping me. I knew I could get up, and that was all that mattered. I’d worry about coming back down when I had to. I climbed a few mountains that I shouldn’t have, and I did a lot of scooting (I still do, on especially steep slopes.)

I have since been able to take on some of my dream treks, like exploring the depths of Hell’s Canyon that only backpackers and rafters get to see, or meandering through the lush redwood forests of the Pacific Crest Trail. 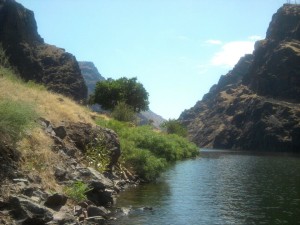 But this story isn’t just about overcoming obstacles, or physical healing, or even accomplishment. This story is about how I was able to get back to what gives me the most peace: hiking up a mountain or deep into the forest to think and reflect. While there are opportunities for growth around us every day, for me, there is absolutely nothing like a solo foray for reflection and self-actualization.

Sitting on top of Elephant Rock allowed me to grasp that I would, eventually, have my life as I once knew it back. Jumping into the chill of the Snake River in the wildest reaches of Hell’s Canyon provided me the shock I needed to finally accept an unwanted life change, and I can never explain what my trek through the Pacific Crest Trail and the redwood forests of Northern California did for me.

While my life changed drastically in the year following that day at Elephant Rock, it only really gained momentum as I repeatedly brought my soul deep into nature to heal. There is a lot to be said about nature reflection and meditation (and even meditation vacations, if you that need a longer retreat) and I’d really like to advocate for the outdoors’ ability to mend hearts, ease weary souls, and enlighten confused minds.

When I think back to my biggest accomplishments, they are always accompanied by the memory of what forest I was in, what mountain I’d climbed, or what valley I’d nestled into when I made the choice to make a change, or discovered that I had it in me all along. My peace is in the great outdoors, my meditation never deeper than in nature, and myself never better sought (or found) than in the lonely little nooks and crannies of the world.

I urge you to get out into nature and reflect on yourself, or even, nothing at all (this can sometimes be the most healing.) I guarantee you won’t regret it. I am very lucky to have regained most of my nerves and muscles, and I will never squander my physical or emotional potential again. 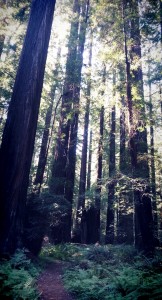