By Kristi Dranginis of Bird Mentor (and who will be teaching at Summit Sisters!)

Just last week I happened to notice a solitary Pygmy Nuthatch at my bird feeder.

Okay, a Pygmy Nuthatch at my feeder in and of itself is not unusual, but the fact that it was alone is what stood out as odd.

You see, they prefer to move about amongst a fairly good size flock and seem to devour the seed you offer them in no time.  The interesting thing is that if this were any other bird, say, a jay or a starling, it would surely be despised by bird lovers.  I imagine it must be the pygmy’s demure size and cute little squeaking sound that endears it in the hearts of people all across western North America. 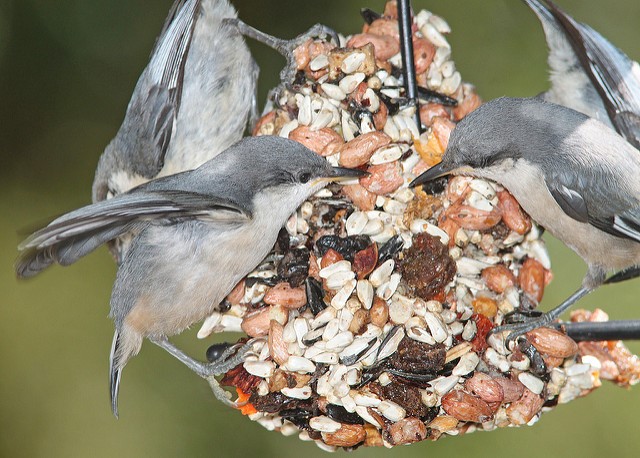 So, one night just after sunset I decided to take 5 minutes and watch what this little cutie was up to before jumping in to cook my dinner.

Then, in the middle of one of it’s back and forth’s, it flew off across the driveway, landed on the branch of a small snag at the edge of the river and started chirping incessantly.   I thought maybe he ate one too many seeds and was beginning to go mad.

That was until a little head popped out of a hole on the main trunk of the snag not too far from the pygmy, looked around and flew across the driveway toward me and the feeder.  Without skipping a beat, my little buddy flew into the hole and disappeared.

It all made sense now, the pygmy was “alone” because it was nesting.  Of course! How awesome!  A Pygmy Nuthatch nest in plain sight.

That’s not the end of the story.

A few days later the neighbors were out “cleaning up” the area down by the river (a neighborhood common area) when I noticed a few of the men heading toward the pygmy’s snag with chainsaws in hand.

No, they weren’t going to cut down the tree with the nest in it were they?  Don’t they know. . .   No, they don’t know.  I hesitated for a minute, not wanting to sound like a crazy woman, but realized this might be my only chance to get their attention and tell them about the nest.  So, I politely hollered down and let them know there was a bird nest in the snag.

They looked at me with funny expressions for a minute, pointed to the snag, talked amongst themselves, pointed, looked back and forth at one another, shrugged their shoulders and eventually moved on to cut the next broken limb down the trail.

Phew… the pygmies made it!  Now, a week later they are feverishly entering and leaving the little hole in their snag with whatever food they can find.

I am certain that if I had not watched the pygmy that night (it was really just for 5 minutes) they would have lost their little family for sure.

Give yourself the gift of 5 minutes to be with the natural world this week.  You never know who might benefit from your observations.